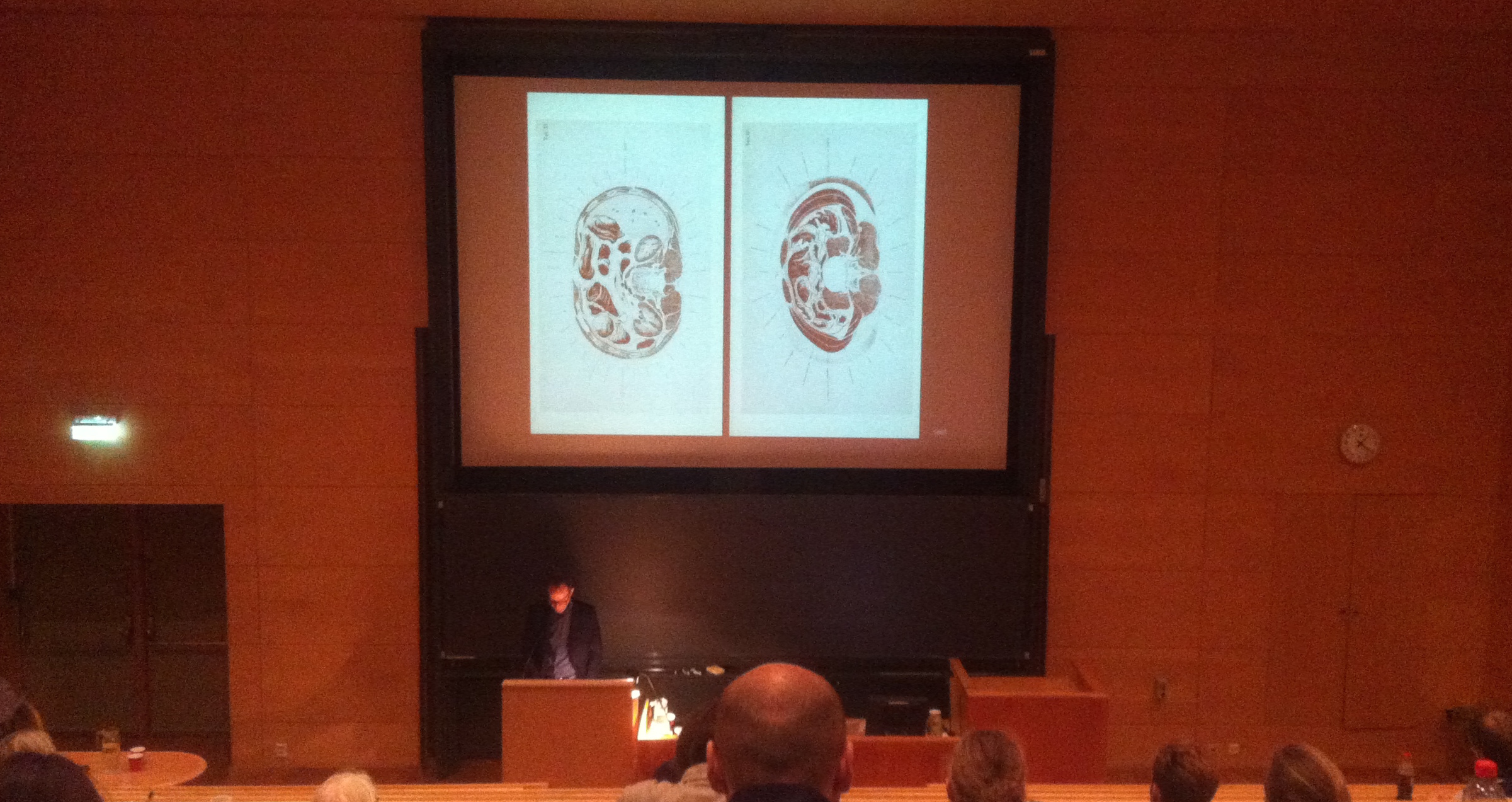 What is an image? Images appear everywhere, not only in our social lives on our screens, but also to an increasing degree when we visit the doctor, go to fix our teeth or when we visit the hospital. Our time is “image-obsessed and and image-dependent”, the organizers IMK write in their introduction to the symposium “imag(in)ing technologies” at the University of Oslo December 3, 2015.

Patricia Pisters from the University of Amsterdam opened the symposium with a presentation of a future research project on a media history of metal. The project she presented was in an early phase, inspired by work done by Jussi Parikka in his Geology of Media, Jane Bennets new materialism and her Vibrant Matter, but also drew inspirations from the films of Sergei Eisenstein and the photographs of Sebastião Salgado (portrayed in Wim Wenders 2014-film Salt of the Earth).

Matthias Bruhn from the research group Das Technische Bild at the Humboldt University of Berlin talked specific about the technical image technology, the technology which produces the majority of images today. Images are not just representation of things imagined or things that have happened, Bruhn argued with reference to the concept of Denkbilder by Walter Benjamin; we use images to think and act upon. The pictures represent something and at the same time does something, they are concrete while at the same time extremely abstract. For example: Images of brains (with or without tumours) guide the sergeant’s action and “anticipate” what the doctors do next, but at the same time creates an abstract model of the patient’s brain.

To be able to talk about the “fiction” created by the technical images, Bruhn suggested the word “piction”: From the latin word for writing, fingere, we get fiction, and “pingere”, paint, can therefore be said to become “piction”. To examine the “piction” created by these images, we need collaborations between medical historian and art historians, Bruhn argued, to explore the Denkstil of the images.

The term “piction” seems to be a useful term, or at least an important reminder that images create their own kind of fiction with distinct characteristics. The concept of piction echoed in a reference to the Brazilian thinker Vilém Flusser, made by professor Siegfried Zielinski. Flusser suggests that the synthetic image is an apt model for the thinking in the late 20th century. As he says in an interview from 1988, our present is too complicated to be described in words, we need the

technological image to organize our thinking.

The most entertaining figure of the symposium was without a doubt Zielinski, both during the discussions, and in his own lecture, “On Deep Time of Techno-Imagination. Past & Future Connected as Potential Spaces”. Wim Wenders is a sentimentalist, he said in the discussion after Pisters’ lecture, and “new materialism” is only old materialism without the critical edge of historical dialectics. Zielinski also seized the opportunity to correct what he thought of as the misunderstood standard historical narrative of media theory. American media theoreticians think that everything started in the 1960s with McLuhan. German thinkers yawned when they heard McLuhans oneliner “media is the massage” – they had already read Ernst Kapp, who had said the same thing as McLuhan 90 years before.

The symposium ended with Zielinski’s lecture about experiments with automata made by Arabic scientist Ibn-al Haytham and other scientists in Baghdad in the 9th  to 11th century. Baghdad in this period of time was a highly educated city, where experiments with automata were carried out, at least on paper. Zielinski and his team of researchers have found manuscripts from the 9th century in Baghdad where automata were described, and they immediately started to recreate the technology they read about. This, Zielinski said, is the best way to do media archaeology today: to reconstruct old machines. Machines are not just Denkbilder, but Denkdinge, they are things do think with. They allow us to think both horizontally and vertically when we try to understand historical processes.

Before coming to the theme of his lecture, which he only spent 10-15 last minutes on, Zielinski took several detours, among them a detour to the history of media theory, to stress the utopian aspect that has been a driving force for media theory the last 60 years: In the late 50s and early 60s the machine was seen as a saviour, because it was incapable of being as evil as the humans had been in the 20th century. In other words, great hope and optimism on behalf of the machines characterized thinkers from Marshall McLuhan to Max Bense. This seems like an important reminder when discussing uses of images and models in health care today – a reminder that within the history of media theory there exists a tendency to overemphasize the salvation-aspect of technologies, and a way of thinking driven by a fear of what the human agents are, or are not, capable of.